Places to see in Mahabalipuram 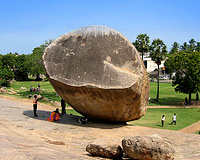 Mahabalipuram is a beautiful temple town situated along the shores of the Bay of Bengal in the southern state of Tamil Nadu. The pure sculptural display of the rock-cut temples gave way to an entirely new style of architecture, which came to be known as the South Indian temple architecture. Find out more about the various tourist attractions that can be included in the sightseeing tours to the place.

Shore Temple
This is a structural temple, built with blocks of granite in Dravadian style and dates back to the 8th century AD. It is built on the seashore of Bay of Bengal with one wall constantly being washed by the sea. The temple is the masterpiece creation of the Pallavas and represents the zenith of the Pallava architecture. It is a combination of three shrines and features a Vishnu temple built in between two Shiva temples.

Arjuna's Penance
Arjuna's Penance, 27 metres long and 9 metres high, is a gigantic relief made on two huge boulders and is perhaps the world's largest bas-relief, a universe itself in stone. The cleft in the rock describes the descent of the Ganga, brought to earth by King Bhagiratha to emancipate the cursed souls of his ancestors.

Ganesh Ratha
Ganesh Ratha Temple in Mahabalipuram is located towards the north of the Arjuna's Penance. It is a temple carved out from a rock to resemble a chariot and is built in Dravidian style. It was once dedicated to Lord Shiva. But when the original lingam was removed, the temple came to be known as the temple of Lord Ganesh.

Trimurti Cave Temple
Trimurti Cave Temple, Mahabalipuram is located towards the north of the Ganesh Ratha. This temple is dedicated to the three chief gods of Hindu pantheon, namely, Lord Brahma-the Creator, Lord Vishnu-the Protector and Lord Shiva-the Destroyer. There is a separate section in the temple for each of them.

Five Rathas
These are the rock-cut temples in Mahabalipuram carved in the shape of a chariot and were built during the Pallava period. The five rathas are called the Draupadi Ratha, Dharamraja Ratha, Bhima Ratha, Arjuna Ratha and Nakula-Sahadeva Ratha, named after the five Pandavas and their wife of Mahabharata. The smallest and the simplest is the Draupadi ratha and the largest is the multi-storeyed Dharmaraja ratha scooped from a monolithic rock.

Tiger's Cave
This cave is located just 4 km north of Mahabalipuram. It was built as an open-air theatre, where cultural programmes could have been held during the Pallava period. Though it is very near the sea, the place is very serene and calm.

Varaha Cave Temple
This is a small rock-cut mandapam dating back to the 7th century. Inside the temple side walls there are large sculptured panels depicting Vishnu as Varaha, the boar, holding up Bhudevi, the earth goddess.

Dharmaraja Cave
Also known as the Atyantakama mandapam, this seventh century structure consists of three empty shrines. Past the mahamandapam, there are two full Mahendra type pillars and two half pillars with a plain kapota. There are three garbagrihams (cells) for three deities, though now all of them are empty.

Krishna's Butterball
It is a giant natural rock perched precariously on a hillside and startles the visitor with the way it's balanced.